It's time to take things to the next level... are you ready? 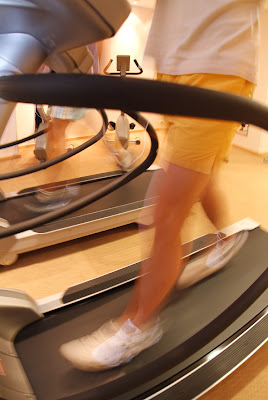 I was feeling a little frustrated today so I decided to do something I haven't done in a while - I hopped on the tread mill and took off. It wasn't long into it that I realized I really was in as bad of shape as I suspected (by the way, don't try to take your shirt off while still running on the treadmill - bad idea). I also realized I've been coasting (in a lot of ways, but especially physically). I've known I needed to do something about it, but I haven't. Today, I had had enough, it was time to take it to the next level.

Jesus was constantly challenging people to take it to the next level. He challenged the disciples to get out of their boat and follow him into a new future. He challenged the religious to lose their religion and find the heart of it all. He called the crowds to the next level when he taught that if they wanted to truly find life, they needed to lose themselves in a cause greater than themselves.

It’s time! It's time to stop coasting. It’s time to take things to the next level with this new church! Are you ready?

We’ve been meeting for several months now, pulling together a team and now it’s time to get rolling. January 6 we’ll have one last key Pre-Launch Gathering. We’ll once again tackle vision questions, discuss our strategy, and lay out a Launch Team Covenant. This is the point in what we’re doing when everyone decides how committed they are and how much they believe God is calling them to this and how much they believe in the vision. This is where we start to lean in; this is where it starts to get exciting!

We really want as many of you on the team as possible, but you need to engage.

Guys, it is going to be great! God has given us the challenge and privilege of starting a new kind of church, one that is Biblically solid and connects with culture. Man, I cannot tell you how amazing this new church is going to be!

(I'll be posting a little later in the week a little bit more about mission, vision, and values for ? church.)
Newer Post Older Post Home