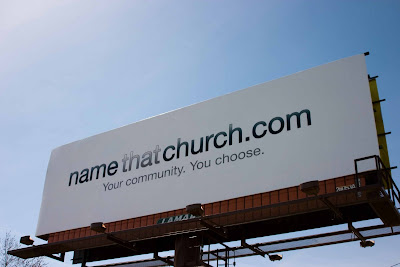 Part of the vision for this church that God has placed in our hearts is that we would launch large. We believe it's not only possible but it would also honor God to launch with 200+ people (large is relative). This would give us tremendous traction and momentum as we begin to impact this community for Christ.

I've shared this with a few people (and I'm sure a few of you might be thinking it) and some have been skeptical. They didn't necessarily think that it couldn't be done but that maybe it shouldn't be done. I even had a church tell me that every church should start small and cozy, like in some guy's basement (like their church did). They didn't think our vision was biblical. Again, they thought it should start small. Sounds nice, right? I had to bite my tongue. I wanted to respond back by saying, "What? Do you mean like Pentecost!?!" I would have definitely said it with too much attitude (like I just did when I typed it).

Can you imagine launching a church with 3,000-people!!! Pentecost, the day when thousands of people attended an impromptu church service and 3,000 of them accepted Christ and were baptized! This "launch" led to the incredibly rapid growth of the church in Jerusalem. Some scholars estimate that this church numbered somewhere near 25,000-people! While this isn't the norm and isn't what we predict in Macomb, launching large provides great momentum and can prove incredibly effective in many areas. (Not to mention just the shear fact that behind every number is a name, a person's story!)

So, we believe not only would launching with some size be incredibly effective, but it would also be incredibly God-honoring. So, when this is part of the vision, it means different strategies, different plans, different approaches. You either go big or go home!

So, we have posted namethatchurch.com on the biggest billboard we could find on Hall Rd.! That in itself is a God story. (fyi - this billboard is 14' tall and 48' wide, we have the board for a biblical 40-days) Our prayer is that God will use this crazy idea to spark some interest and create some buzz. We've already seen some great response. We believe God is stirring in the hearts of hundreds of people in Macomb Township and preparing them for an encounter with Jesus... an encounter that will change their entire lives!

God, we're giving you everything we have. We trust in the vision you've given us. We know you want to connect with the people of Macomb way more than we do. We know you want to see your church thrive in Macomb way more than we do. It's an honor to be a part of something like this and a privilege to be burdened (in a good way) with a vision like this. Thanks in advance for all you're going to do!
Newer Post Older Post Home